Posted on February 1, 2022 by Sebastian Marquez

Part I showed what we have done in the last 10 years at the restoration site. What lessons did we learn in that time that may help for the next 10 years?

This is a view from Google Maps that took me a few minutes to created. The upper green polygon is our current 6 acre restoration site. The thin lower green polygon is another remnant patch of native forest on Pu’u ‘Ohi’a. In between, is a giant monotypic patch of bamboo. I demarcated it off in red.

Now, what does a simple map with arbitrarily drawn polygons have to do with my funky post title? Well, when I was 18, I began writing a science fantasy novel. It was full of Elves, and Dragons and Goblins. Pretty cliché stuff. I had also populated the world with Chalicotheres, Moas, Dromaeosaurids, Sabertooths, Giant Ground Hawks (Phorhusrhacids) and more. Even at 18, I wanted a world where these extinct beings were given a second chance to live a life worth telling.

Naturally, this fantasy world had magic spells. Spell casters had words of power, words of action. In my research for this novel, I came across what I thought was a useful word-

Mages in my world reified the intangible arcane into useful spells for combat. You might see where I am going with this. I have plans for this arbitrarily marked off polygon of invasive bamboo and am attempting to reify the native forest in my mind into its place. No magic spells necessary.

We saw these photos taken roughly a decade apart in a previous post. But this has been one of the most interesting lessons from the last 10 years for me. I had assumed that bamboo, being basically a giant grass, would resprout readily. Without systemics, it would just aggressively reshoot and be difficult to manage in order to get native canopy. Much to my surprise, the bamboo did regrow but slow enough for the koa to get established. And it’s not like we planted large koa to give it a headstart on the bamboo: it mostly came up on its own from the existing seedbank.

What happened in this part of the restoration site got me to reconsider the giant monotypic stand at the top of Pu’u ‘Ohi’a. Yes, it is terrible for native forests; the shade from the stalks and the thick root mass really inhibits competition from other plants. Left on its own accord, the bamboo patch will only continue to grow larger. But what if for our purposes, we can use the bamboo own advantages against it and use it like a ready made weed mat? What if, like the photo above, we can get native trees established? 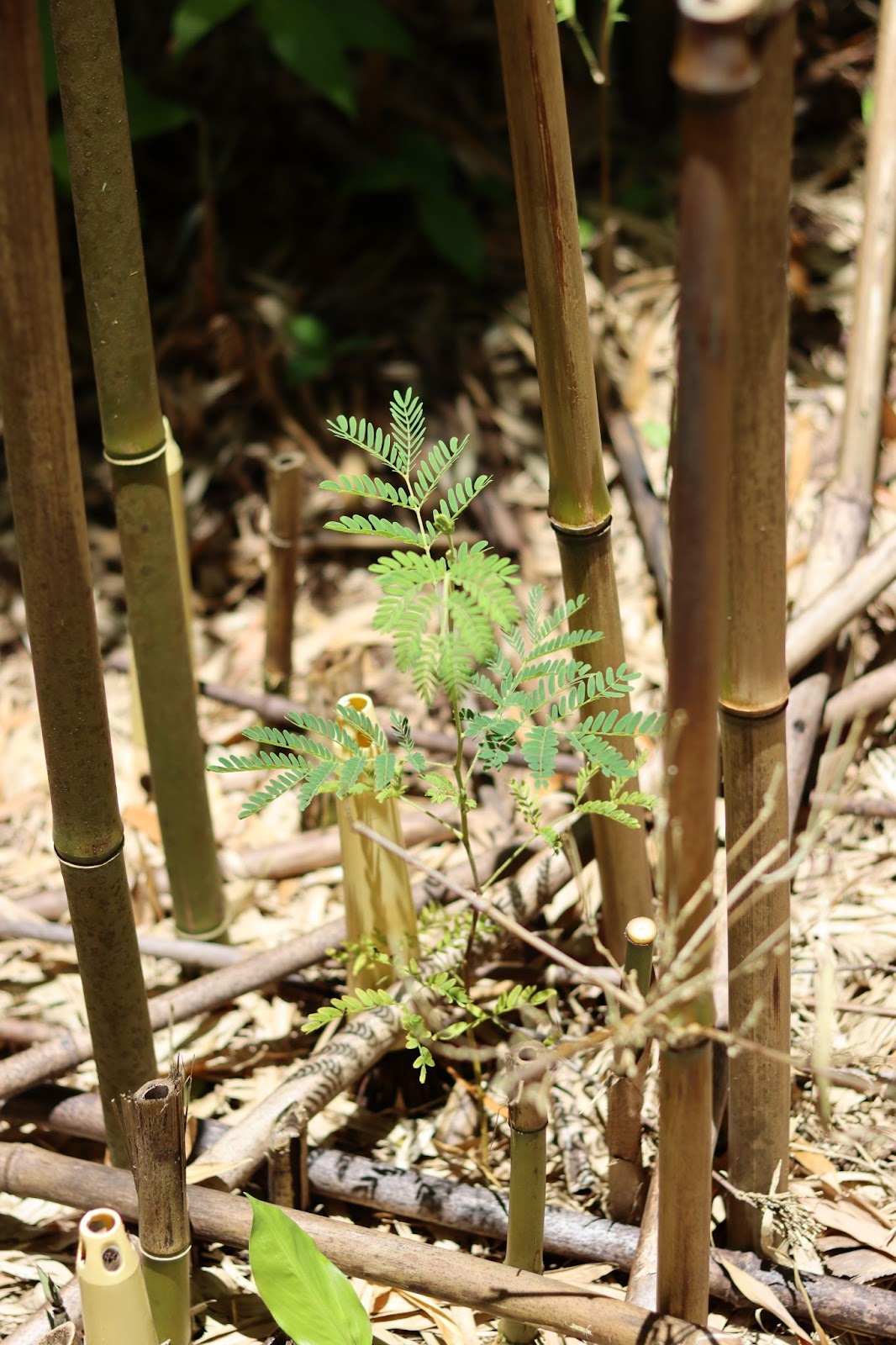 So towards the end of 2016, I cut some test plots in the bamboo, planted some koa from dibble tubes and basically walked away. I continued to do work elsewhere in the restoration site. I was curious if I could get koa to grow and have the bamboo do all the weeding for me. Here’s what one of the larger of those 2016 koa looked like when I checked on it in the summer of 2021:

This one is probably at least 15′ tall and the canopy is starting to spread over the bamboo.

It’s very exciting but there are still so many questions. Can I scale this up? Will the bamboo still react the same way? Will the koa stay healthy?

Will this work? I have quiet confidence that it will. This confidence does not just come from 11 years working at the site but also from 2 very disparate sources: Basketball & Elephants.

Elephants are a classic example of a keystone species. They are species that have an outsized effect on their habitat. Elephants doing Elephant things affects the composition of the forest and thus, all its inhabitants. We, for a lack of a better term, can be keystone individuals. Native forests were probably very dependent on the different ecological services native birds once provided: i’iwi and ‘o’o birds for pollination, ‘o’u and deep billed ravens for fruit dispersal. They’re gone now, but we can take up the mantle until hopefully malaria-resistant birds can take over in full force once again. We may not be out there 24/7 but as long as we are consistently trying to replicate those services we can have a similar outsized effect on the forest.

In some ways being a keystone individual is the antithesis of being an conscientious hiker. Leave no trace, pack in, pack out- hikers and others understand the negative impact humans can have on the natural environment and work to minimize it. I’m saying as keystone individuals we acknowledge our effects and make the point that human impact doesn’t have to be a negative if we’re smart, resourceful and caring. If we are going to leave a human footprint on the environment then it might as well be beneficial to the environment. We want to leave a trace.

As to basketball? Well, aside from writing my novel, I was playing basketball all the time when I was younger. It was Chicago in the 1990’s with Michael Jordan at his peak. Everyone in the city was playing.

And very neat aspect of basketball played at a high level is that players can go through something called the “zone” or “feeling it”. When it seemed like no matter what kind of funky shot they took, it was going in.

Some psychologists have defined this as flow state when one is working with high skill in a high challenge situation. I supposed this is a good enough definition but I feel it doesn’t fully capture the essence of the experience. For I have been lucky enough to be in the zone every now and then when playing basketball. And it’s a beautiful thing.

Yes, I felt like I was playing effortlessly, where I was making the correct decision instantaneously and without thinking. All the textbook things about flow state. But for me, the greatest thing about being in the zone is the temporal aspect. I felt like I could tell the future. I felt, as soon as the ball came off my hands, I knew whether it was going in or not. More often than not it was. I can’t really explain it beyond that. It’s just a very strong signal about an outcome that has not yet come to pass.

Granted, it’s only a little over a second ahead in time. Not many things can happen between shooting a ball and making a basket to affect the result. Restoring native forests where we are trying to assess the situation possibly decades from now? Plenty of unforeseen events can happen between now and then. But it’s a strangely familiar feeling. Perhaps there are not many other things that I do at a high enough level, but I’ve never come close to being in the zone in other activities. I’ve never stopped myself and said “Wow, I’m cooking the heck out of this pot of rice!” or “Man, this computer is in trouble, cause I’m typing the ^*&^ outta these excel formulas!” And yet, I get something like that feeling when I work with native plants. It’s hard to explain. These plants are coming off my hand clean. This outcome has not yet come to pass, and still, I can see the native forest that these little trees will become.

I AM chuckling as I write this because I keep thinking: “Is this hubris?” Here I am talking about how awesome I am planting these plants in a native forest that doesn’t exist. (Not to mention that I’ve basically turned this blog into a 10 year conversation with myself!) It’s also worth pointing out I’m using a definition for reification from a novel in my head; the actual definition is more a warning that someone is thinking illogically. Tied to an abstraction that won’t exist, keeping them from seeing the reality in front of them. That too maybe apt.

Let’s just wrap all this up with this. For all my hand-wringing, for all my talk of Dragons, and Magic and Basketball, there are native plants out there fighting every second of every day against a never ending horde of invasives. Their future does not have to end in despair if we do something meaningful about it.

Will we? If part one was talking to 2010 Sebastian, then part two is speaking to 2030 Sebastian. How are you? What’s the world like? How is the native forest? Have the Bulls finally won another championship? We’ll just have to wait for him to chime in. In the meantime, let’s get to it!

This entry was posted in Sharing the planet and tagged Conservation, Native Hawaiian Plants. Bookmark the permalink.