Manoa Cliff 10 years Part I: A look back

Posted on January 18, 2022 by Sebastian Marquez

It seems like yesterday I walked into the native forest on Tantalus. It is a memory that sticks out clearly in my mind; June 20, 2010. And in a seeming instant, a decade has past.

I have not been active on this blog for quite some time, and yet I look back on my posts fondly. While I hope you, dear reader, were entertained and mayhaps picked up a bit of knowledge, occasionally I like to glimpse at a younger version of myself and peer into his mind once again.

Take one of my early posts on Project Runway of all things. For some context, at the time I had just left my white collar IT career for a chance to do what I always hoped for: meaningful conservation work. I had no actual experience in any of it. Just a lifelong interest in the natural world. Could that get me anywhere? Was that enough? I still remember what I said in the interview for that first conservation job: “I feel like a battery sitting on a table. All this energy doing nothing. I want to connect to something.” I yearned for the chance to do important work for the natural world.

And in that post, I wanted to know if there was a way to test myself. Was I as good as I thought I was? Or was I all talk? Frankly, I was wistful for an elegant cocktail dress to showcase one’s skill, craft, and passion. Or not show. What’s the conservation version of a cocktail dress? Well 2010 Sebastian, I’m here to tell you that you spent the next 10+ years well. For while you didn’t blog as much as you would’ve like, you did pour a lot of effort into that native forest on Tantalus. Come, dear reader, let’s show younger me what I had been up to!

Here’s a photo from 2010 showing a gulch that had been infested with ginger for quite some time. This shot was indicative of many areas of the restoration site: the large trees (‘ohi’a) are native but due to disturbance, the ground cover was not. At 4-5 ft tall, the ginger seemed like a tough battle to take on. One of the more pernicious things about the ginger understory is that it stabilizes as ginger. Nothing but ginger can really grow there and without intervention, it will just keep spreading. That’s really the crux of the problem facing native forests: Given the current factors, the forest tends to find equilibrium as non-native. Non-native areas stay non-native while encroaching into native areas. It’s just that simple dynamic over and over again that causes so many problems at the ecosystem scale. But take those problems on we did.

This is what the gulch looks like 11 years later. While there is still ginger that comes up, it is more manageable and we have been able to get other native understory and mid-story plants established. We’re particularly pleased at how large the hapu’u (Cibotium chamissoi) have gotten. They are at a size where they are shading out some of the more aggressive invasive plants. 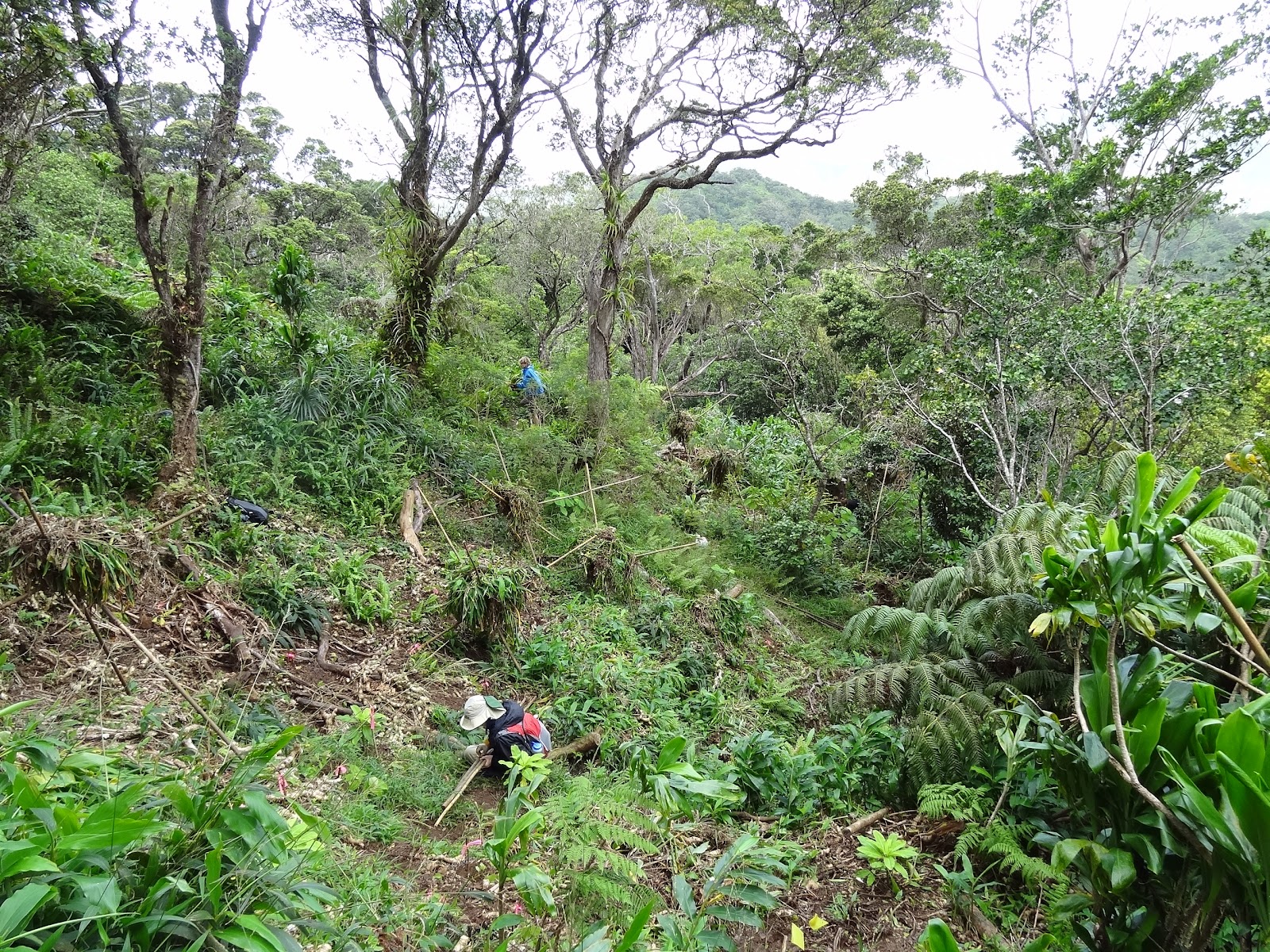 This is the same gulch but a year after in 2011. This pair of shots is taken from the opposite side looking back toward the previous viewpoint. I hope it gives you a sense of scale with a couple of us volunteers working diligently away. By this time, we had already cleared a lot of the ginger and had begun planting. 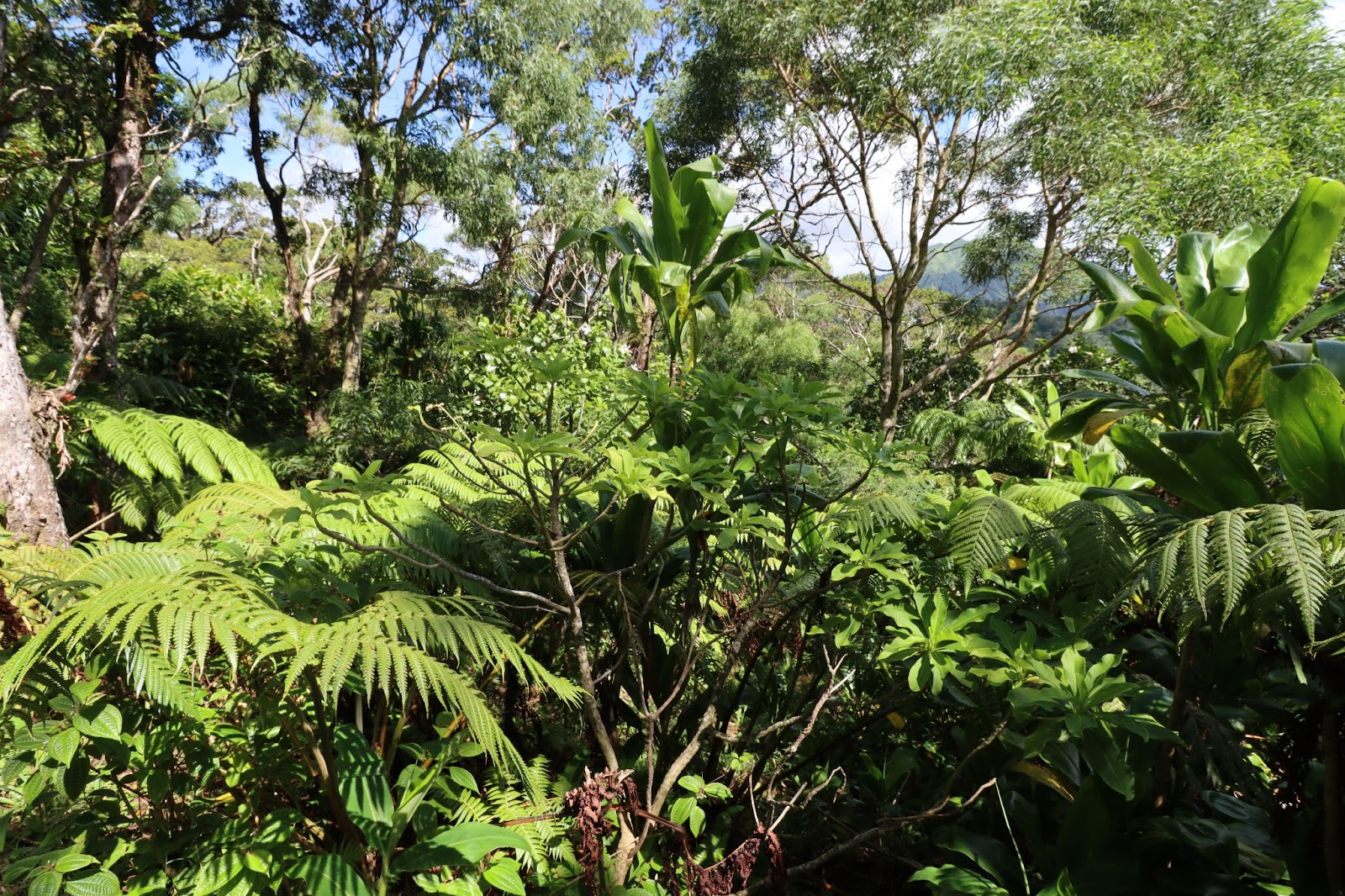 And again, here is the same view after 10 years of work. Now the tree ferns and Clermontia in the foreground block the view of the gulch itself. What I do like that these two shots show the upper right quadrant. In the 2011 photo, it is fairly open. Since that time, one koa tree came up and is now pushing 20′-30′ tall. 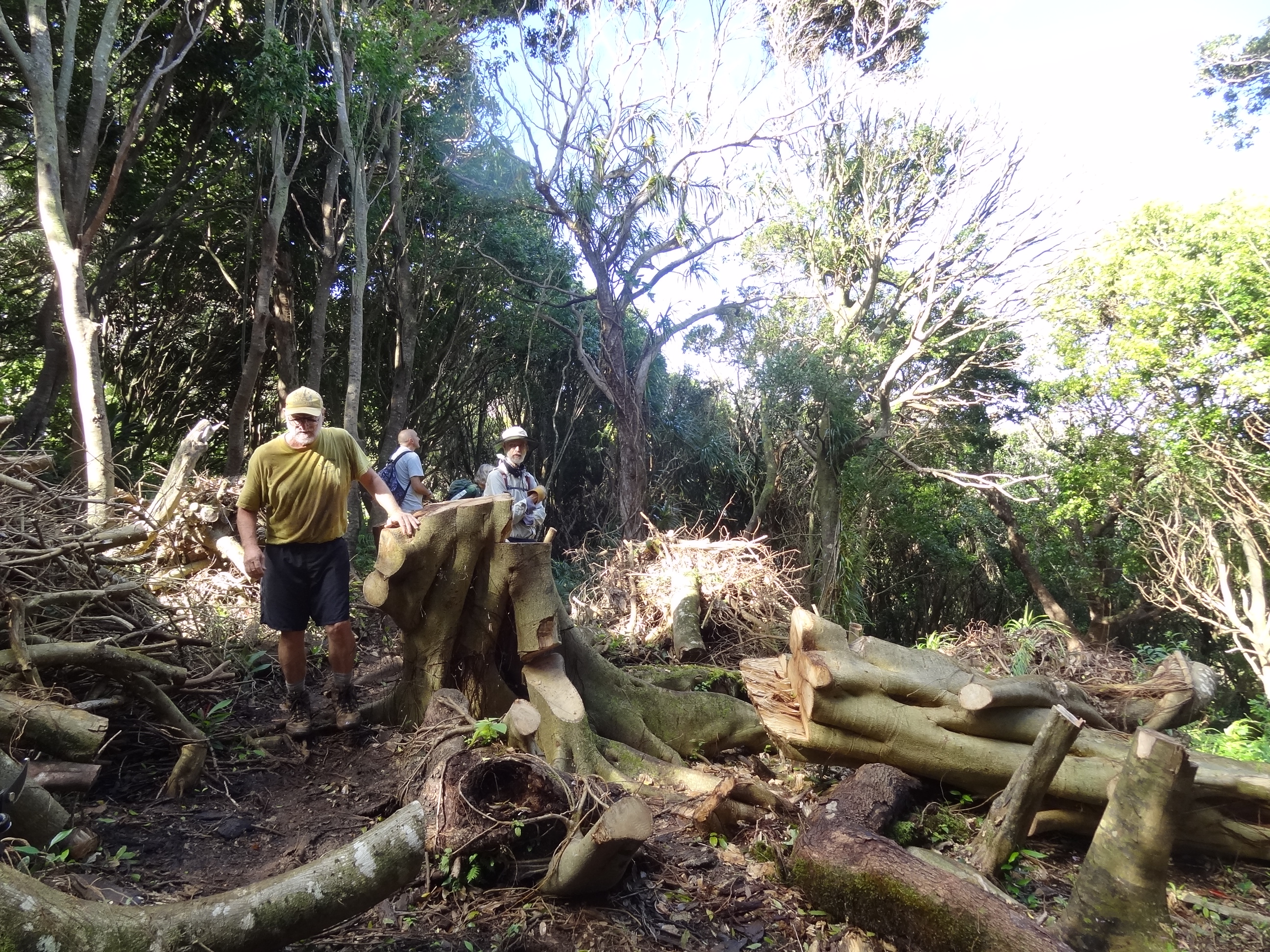 Here’s another area. This is a large banyan tree that we felled back in 2014.

Here is a photo from the same spot taken 6 years later. The banyan stump so visible in the first photo is that dark mass in the center. Every single shrub taller than the stump is native and I’d say over 90% of the plants in frame are as well.

As I’ve observed this spot of the forest around the old banyan stump regrow, I’ve been heartened by the dynamics I’ve seen develop. There seems to be positive reinforcement where, as the native canopy becomes more established, the ground cover is more conducive to native seedling establishment. I’d like to see that feedback loop in more areas through the site; we’ll see if we can make that happen. 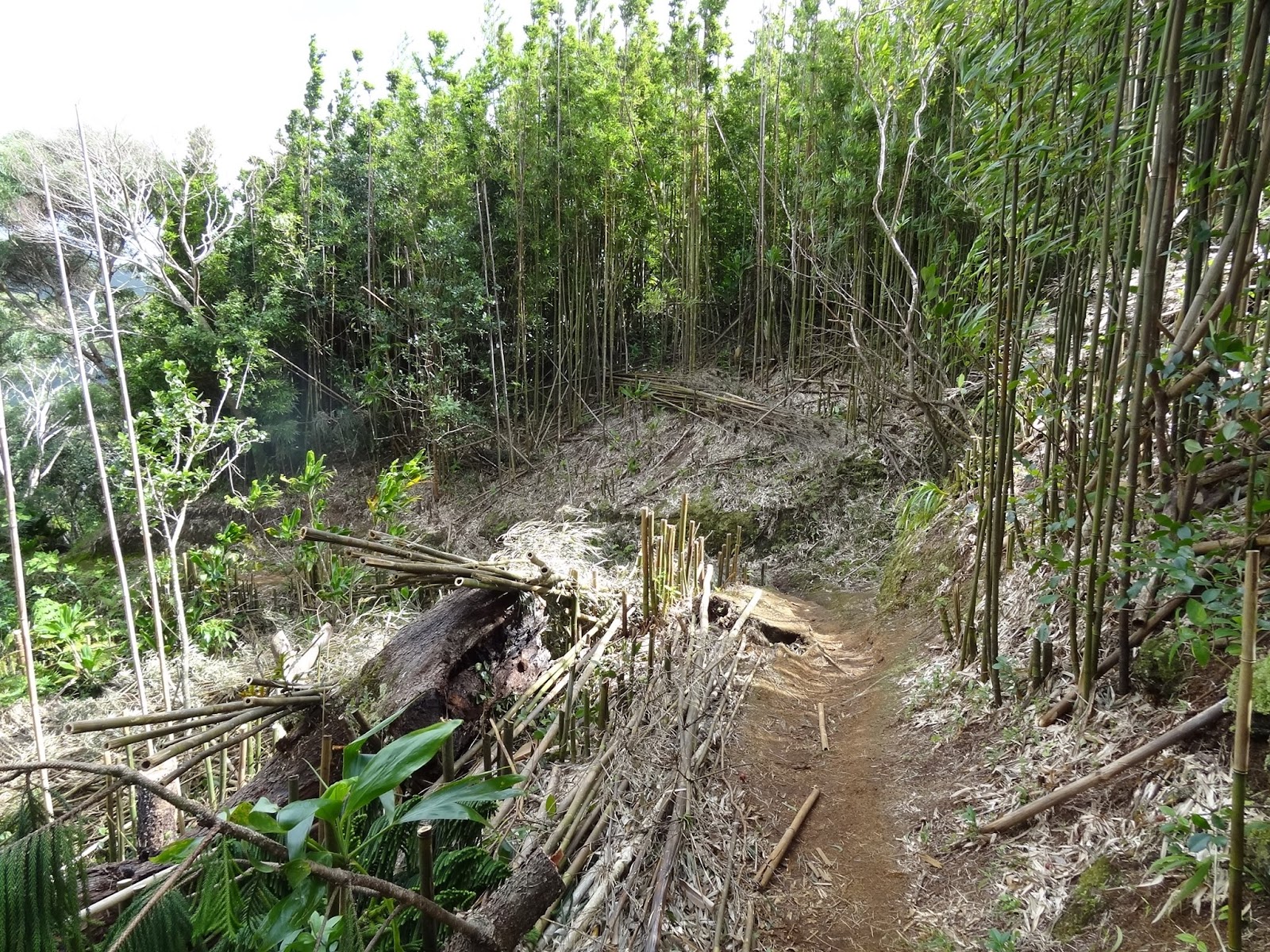 I think this is one of the more dramatic before and after photos we have. Stands of bamboo, like ginger, will stabilize as monotypic patches. Unlike ginger, it is tall and aggressive enough to kill mature native trees more quickly than one would think. This photo was taken early 2012. You can see we have already started cutting the bamboo on the lower left side of the photo. 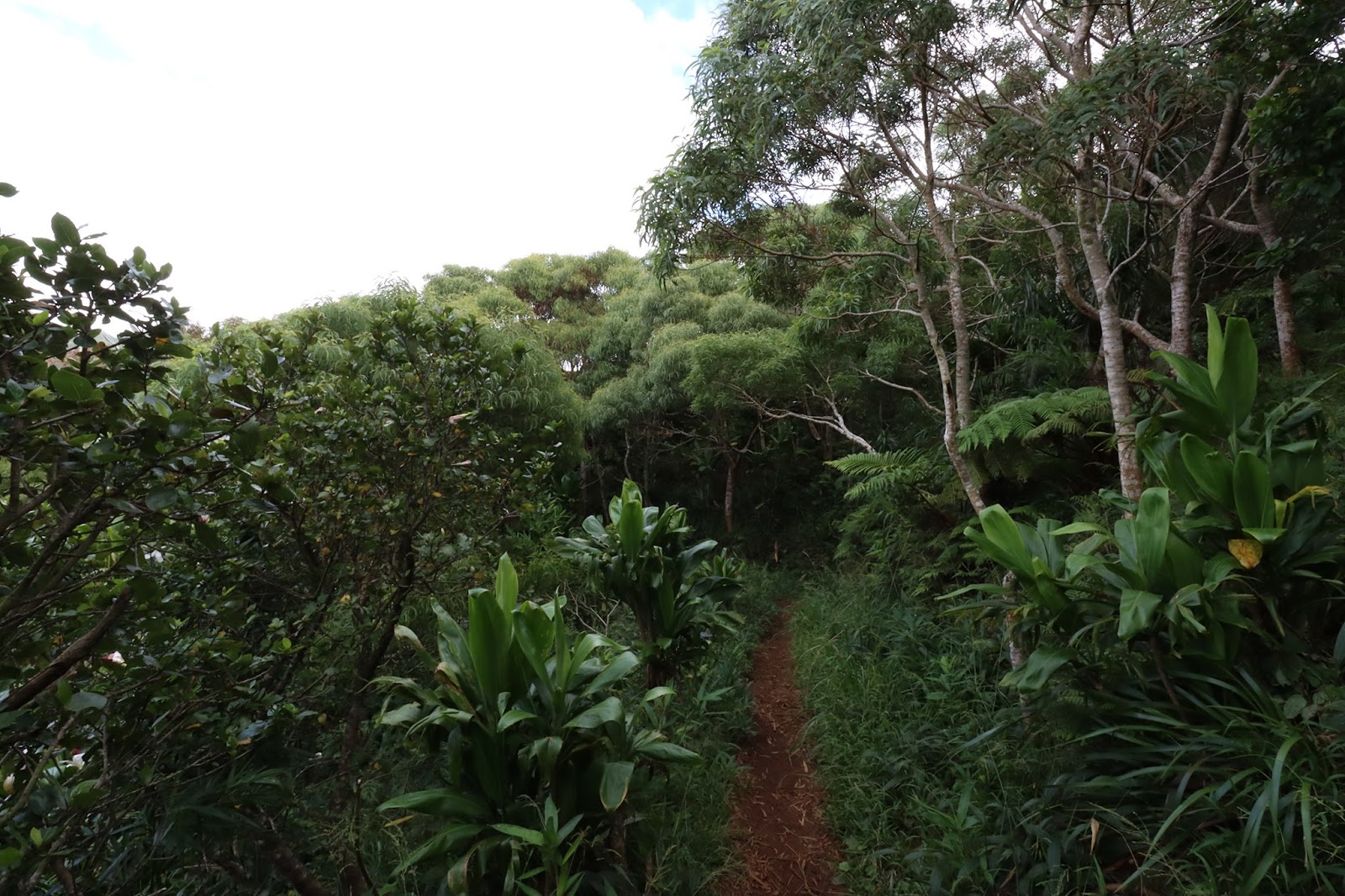 And here is the exact same spot, taken 8 years later. Much of the bamboo is gone; the slope in the background is now a pure koa canopy. The broadleaf trees on the left are native white hibiscus. In fact, all of the canopy pictured is now native.

While it is quite satisfying to see just how positive the native forest has reacted to our efforts, at the end of the day it is still just 6 acres. It’s a very nice 6 acres but it is a drop in the bucket compared to the entirety of the problems facing native places throughout the archipelago. Our solutions may scale out well, but I’m not sure if I can say the same scaling up. Whatever the case, I hope you can see what a difference 10 years can make to restoring native forests.

If the younger me was looking for a cocktail dress, he didn’t get it. I got a roadmap instead. For I don’t look at these photos with a sense of satisfaction on a job well done or that I’ve passed some test. It’s never done and that’s the point. That may seem depressing from the outside but bear with me. I think of the term kuleana a lot. In many ways I like to describe it to people as one of those terms that doesn’t have a direct English translation, much like the Tagalog gigil, the German backpfeifengesicht or the Japanese tsundoku. Now when I think of kuleana I think of privilege and responsibility being the same concept; one does not exist without the other. I have the privilege of being in this native forest every week for the past decade, to interact with these precious native plants and animals found nowhere else in the world. I also have responsibility and obligation to care for it. And care for it as unconsciously as one normally is about breathing; that’s the mentality I try to view my actions in native forests. Helping native ecosystems is the unspoken equilibrium state I strive to act in.

“You’re in native forests, you help native forests” -I say that with a helpless shrug. I suppose I could have condensed this entire post into that sentiment. Still, I hope the pictures help make that argument.

Why a roadmap? Well that’s what part II is for. Take care folks.

This entry was posted in Sharing the planet and tagged Conservation, Native Hawaiian Plants. Bookmark the permalink.

2 Responses to Manoa Cliff 10 years Part I: A look back