I was super excited to finally come across this cool native plant. This is the sole native begonia to Hawai’i: ‘Aka’aka’awa (Hillebrandia sandwicensis). I personally like to say it in the same cadence as the name of a certain young mongoose in a certain Rudyard Kipling story. This plant is currently only found on Kaua’i, Maui and Molokai. Hillebrand (for whom the plant is named) recorded it once back in the 1880’s on Mt. Ka’ala on O’ahu.

The genetics (Clement, 2004) seem to show that this plant may have quite the story to tell. For ‘Aka’aka’awa maybe the last of its line, one whose unique evolutionary history may stretch back to just after the extinction of the non-avian dinosaurs. Some advertisers have it wrong. Move over cycads… ‘Aka’aka’awa is the true prehistoric plant of Hawai’i.

I’ve mentioned in some of the first posts I did on this blog how plants and animals have persisted here in Hawai’i by hopping down the island chain as new volcanoes emerge. This process has been going on with some regularity for the past 30 million years. So you can have Hawaiian plants and animals that are thought to have arrived in the Hawaiian chain that date from times older than current 8 main Hawaiian islands. For example, Kaua’i is thought to have arisen from the ocean 5-7 mya, yet lobeliads are estimated to have arrived here 18-13 mya (Givnish, 2008).

These arrivals dates are inferred. We don’t have fossil Hawaiian lobeliads from 18-13 mya. Those former high islands are much reduced in size and don’t have many fossiliferous beds. These dates are found by the genetic work. Researchers look at elements of the Hawaiian biota and compared them from their nearest relatives to estimate when they split off from them.

cohabitants of the mid Miocene world

Notice that it is when not where. Let’s keep rolling with the Hawaiian lobeliads. Sometime in the mid Miocene, when giant 10 ft tall carnivorous phorhusrhacid birds and terrestrial sebecid crocodiles still terrorized hapless mammals in South America, the ancestral population of Hawaiian lobeliads became separated from their nearest relatives (possibly the African montane lobeliads). That’s all we know. Any number of things could have happened. This ancestral stock could have landed in New Guinea, then moved onto Kaua’i, and then have all the New Guinea plants go extinct leaving no trace to have the situation today. Possible, but highly unlikely. The most parsimonious theory is that the ancestral Hawaiian lobeliads arrived at the large Hawaiian island of the time (Gardner) and hopped down the chain.

I’m giving all this background to highlight why the situation with Hillebrandia is so weird and special. Begonia is a pantropical genus with around 1,400 different species. Hillebrandia is a monospecific genus only found in Hawai’i. Yet the genetics seems to show that Hillebrandia split off first and then Begonia began radiating. This split is estimated at 51-65 mya.

Possibly 65 MILLION years ago?! Around the time some giant meteor slammed into Mexico and non-avian dinosaurs went extinct, the islands that were forming over the Hawaiian hotspot were the Emperor Seamounts. These are now a group of underwater ridges currently subducting under the Aleutian Trench in the Siberian arctic. Could the ancestral Hillebrandia have arrived in those islands and island hopped roughly the whole Cenozoic? It’s hard to fathom. Plus there was a significant gap between the formation of the last Emperor Seamount island (Koko) and the next large island (Kure) of about 18 million years (Price, 2002). For Hillebrandia to survive all that just in the Central Pacific requires some interesting stochastic events.

However, if Hillebrandia arrived in Hawai’i after the formation of Kure 30 million years ago it begs the obvious question. From the period 65-30 mya, where did Hillebrandia live? It also means that ‘Aka’aka’awa is a relict; all other Hillebrandia species that lived elsewhere have gone extinct. In some ways it was like the situation on Wrangel island. Woolly Mammoths (Mammuthus primigenus) died off in the end Pleistocene extinctions. Except on Wrangel where they persisted for another couple thousand years. 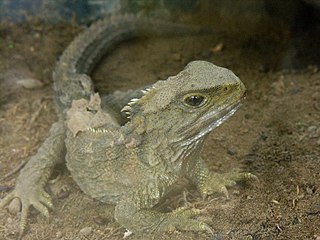 I persist as well

The Hawaiian tuatara. This is the only situation that I know of where Hawai’i serves as a refuge to relict taxa. Perhaps future genetic work will refute this. But for now the evidence shows something awesome happened with the ancestors of ‘Aka’aka’awa. I saw these plants in Koke’e state park on Kaua’i. Here are more pictures for you to ponder the possibilities.

This entry was posted in Natural History and tagged Begonia, Biogeography, Hillebrandia. Bookmark the permalink.