An Afternoon at the National Zoo

Posted on November 25, 2013 by Sebastian Marquez 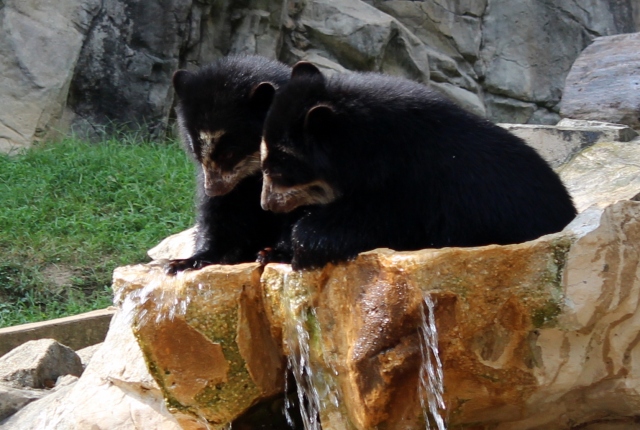 Back in September, I took a trip to see the National Zoo in Washington D.C. It was my first time there, so I was quite excited to see their collection. Naturally coming from O’ahu, I wanted to compare it to the Honolulu Zoo back home. The zoo had a number of animals that I was especially keen on seeing.

Many zoos throughout North America house species of new world monkeys. The National Zoo was no exception. Pictured above is a White-faced Saki (Pithecia pithecia). The species is sexually dimorphic. Only males have this extreme contrast in the facial hair; the white hairs on female P. pithecia are found on a much smaller area of the face.

One other thing that I want to highlight is the difference in nomenclature standards between botany and zoology. Pithecia pithecia is an example of a tautonym where the genus and species names are the same. While this is ok in zoology, it is not allowed in botany. No Hawaiian lobeliad could be named *Cyanea cyanea for example.

*Although a jellyfish could… but that gets into another tangent that we can discuss later.

These two animals are part of a clade that evolved mostly in Africa; the Afrotheria. Rock Hyrax (Procavia capensis) and Asian Elephants (Elephas maximus) were rather easy for me to observe at the zoo. Though, I had never seen a hyrax up close before. It was a neat little guy. While they are successful creatures, hyrax relatives used to occupy different niches as larger herbivores. Those species seem to have lost out once all the bovids (wildebeest, hartebeest, buffalo, gazelle, etc.) flooded into Africa in the Neogene.

Spectacled Bears! Tremarctos ornatus is the last living member of the great tremarctine bear lineage unique to the Americas. Considering my love of American Megafauna, you’ll understand my enthusiasm to see the nearest living relative of the extinct Giant Short-Faced Bear (Arctodus simus). The zoo had many young animals at the time. These T. ornatus cubs were playing in the water, which made for great photo opportunities.

Prairie Dogs (Cynomys ludovicianus) inhabit similar ecospace as Meerkats (Suricata suricatta) and zoos exhibit them in similar manners. The Honolulu Zoo has a very similar looking exhibit for the Meerkats. While both are social creatures with extensive underground colonies, they are not closely related. Prairie Dogs are nested within the squirrel clade (Sciuridae) while Meerkats are a member of the mongoose family (Herpestidae).

Let’s leave mammals for now and take a look at some neat iguanas. The animals within the iguaninae clade have their center of diversity in the Neotropics with some interesting dispersal events.

One dispersal event was into the Caribbean. Rock Iguanas of the genus Cyclura radiated into many of the islands in the West Indies. Unfortunately, like many island endemic fauna worldwide, they haven’t fared well with human settlement. I heard about the plight of this species, the Grand Cayman Blue Iguana (Cyclura lewisi), a few years back. Their numbers had been reduced to possibly as little as 25 animals in the wild in 2003. Luckily, they’ve bred well and some have been released at the Queen Elizabeth II Botanic Park on Grand Cayman. Seeing this iguana live and up close was really cool for me. It was a much larger animal than I imagined and had a lovely bluish tinge to its scales.

This is what I get for waiting so long to tag my photos. I swear this a Fijian Banded Iguana (Brachylophus fasciatus). But when I double check the National Zoo index, it is not there. It does seem to have the general cranial shape and small dorsal spines of B. fasciatus but it’s not banded. Juvenile perhaps? Regardless, I’m no expert and I’d rather not try to definitively answer it. Maybe someone can chime in.

But I won’t let a questionable photo id stop me from talking about Brachlophus iguanas… they are too interesting. They, like the Blue Iguana, dispersed from their neotropic brethren and radiated on islands. What makes it so interesting is the island group. Fiji and its associate islands are roughly 5,000 miles away from South America. How the heck did they get there and nowhere else in the Pacific? (While searching online, I came across this neat paper on the Pacific iguanas)

Enough with the reptile uncertainty, our next stop is to the birds.

Gamebirds are some of the prettiest birds out there. This is a male Temminck’s Tragopan (Tragopan temminckii). Various gamebirds have some interesting mating rituals, this bird is no different. Just check out the Life of Birds series and you’ll see why.

The National Zoo had a really nice collection of larger birds. The Kori Bustard (Ardeotis kori) was one of them. Males are often reputed to be the heaviest volant birds with weights approaching 40 lbs. I wish I saw it strutting away with its beak held high, but its still an impressive animal.

The last bird photo I’ll show is also the worst. But I had to do it because it is a Red-Legged Seriama (Cariama cristata). Once again, it is supposedly the closest living relative of extinct taxa that I like to daydream about: the Terror Birds (Phorusrhacidae). Of course, it is relativistic: all the Terror Birds’  other nearest relatives are extinct. Who knows how much is actually similar between these two taxa. But daydreaming of a seriama triple its size is still fun!

Before we actually finish the post, I wanted to relay one story. We were looking intently for the Maned Wolf (Chrysocyon brachyurus) to no avail. As we were leaving the exhibit, we heard some woman shrieking in terror. My mind immediately went to the irrational thought “Did the wolf just escape?” I turned back around and saw this: 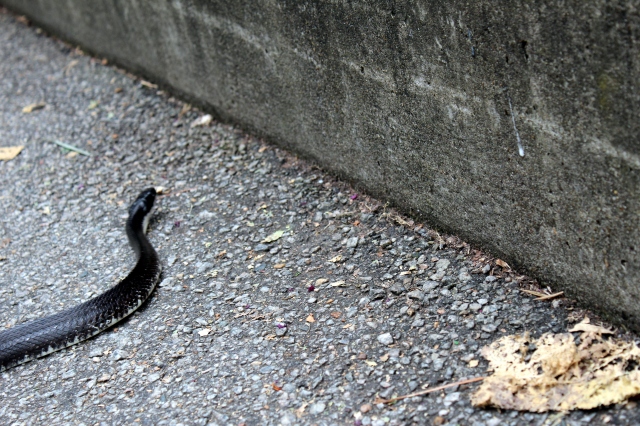 A Black Rat Snake (Pantheropis obsoletus) was crossing the path quickly in front of the lady! Now, growing up in the Midwest, I caught plenty of snakes. But I guess I had grown complacent by being in Hawai’i for so long. I was so excited to see a wild snake! I felt like I was 11 years old again turning over rocks, breathless to see what lay underneath.

It was an exhilarating way to end the afternoon at the zoo. And it was an enjoyable experience. I think the National Zoo is a “must see” stop whenever you are in the D.C. area. To be able to see some cool members of clade tetrapoda (for free no less!), you can’t beat that.