Posted on December 29, 2012 by Sebastian Marquez

If the native plants of Hawai’i are thought to be weak, defenseless plants that are helpless in the face of invasive onslaught… the plants of the strand community did not get that memo. Many beach areas in the islands still have plant communities where the natives hold sway. Like the party pooper I am, I stole away from a beach bbq to check out the flora of this healthy, vibrant community.

The Makapu’u area of O’ahu has a very rich diversity of native plants. While the habitat destruction is just as prevalent along the coastlines, native plants have held up far better than plants inland. Part of that may be the extreme conditions of the coastal habitat. Constant salt spay, extreme sun and sandy soils require some specialization from many plants to thrive. As seen in the photo above, one of the dominant plants in the strand community is the indigenous naupaka kahakai (Scaveola taccada). Its large white fruit are quite buoyant, allowing it to colonize many islands throughout the Pacific.

Speaking of colonization, while many strand plants have fruits that can float on currents, another method was used that muddies the picture quite a bit: man. When people first stepped foot on these beaches, they brought plants with them, knowingly or accidentally. It adds a layer of confusion because without solid evidence, we are not sure whether some of these plants got to Hawai’i on their own or were brought here by people. The next few plants highlight this dilemma. 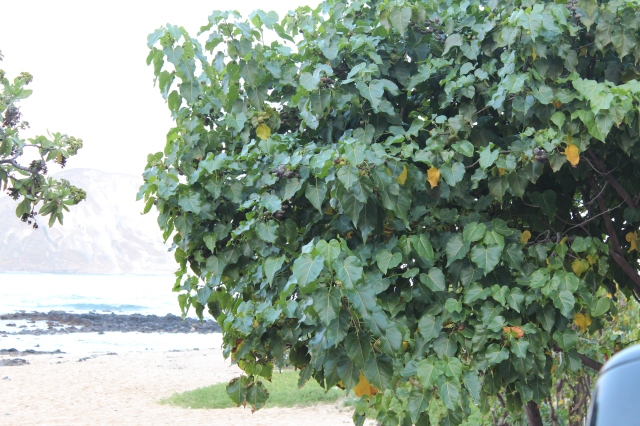 Milo (Thespesia populnea) is a very attractive small tree found in many coastal areas in Hawai’i. Its dense canopy provides welcome shade to the sun-kissed beaches. Its current status is possibly indigenous.

Another strand plant with uncertain native status is this Koali ‘ai (Ipomea cairica). The manual treats it as a Polynesian introduction, but Hillebrand (1888) treated it as native. 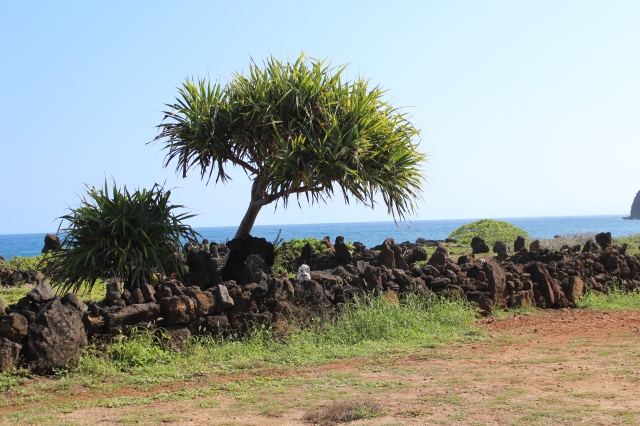 Hala (Pandanus tectorius) is also common in this habitat. Lauhala, the art of weaving with Hala leaves is an important practice here in Hawai’i. Today, there are different varieties in Hawai’i, some of which are not native. 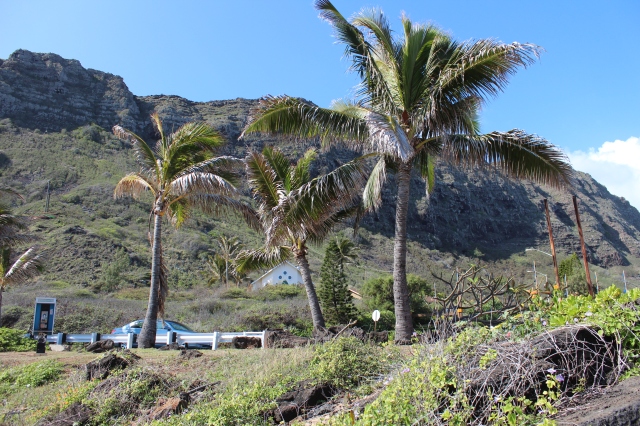 Probably the most famous example of this is the status of the Coconut (Cocos nucifera). Coconut are tasty and infinitely useful to traditional practitioners. As such, they have been spread throughout the world by people as they colonized islands. Without solid evidence showing that they were here before people arrived, coconuts were treated as an old Polynesian introduction and not native. This changed when core samples from Laysan island dating to possibly 5,000 years ago recorded pollen grains from coconuts. It is no smoking bullet, but is does strengthen the argument that coconuts are native members of the Hawaiian strand community. (Coconut pollen found on Laysan)

This plant has an altogether different means of seed dispersal. Alena (Boerhavia repens) are epizoochorus: they have sticky seeds that attach to fur and feathers to be carried away from the parent plant. These plants are very successful, they are very common in the area. The grass behind the alena is also a very common native; it is the salt tolerant Aki aki grass (Sporobolus virginicus). 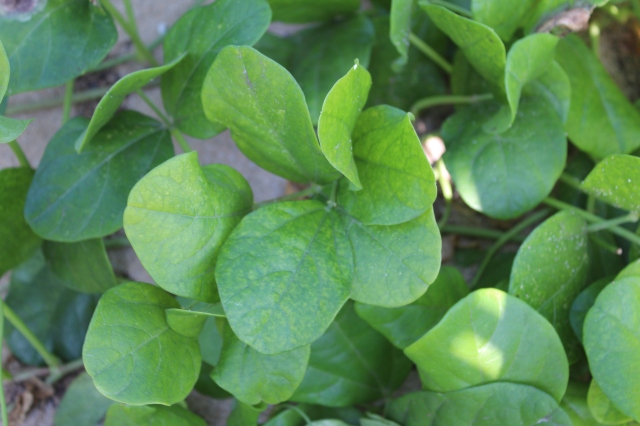 Possibly due to the constant trade winds, many plants along the coast are prostrate. This nanea (Vigna marina) which hugs the ground is an example of this. In this instance, I’m not sure if these plants were naturally there or planted by someone for landscaping purposes.

One neat thing about most of the plants being prostrate is that much of the ground cover is native. In the upland forest, where there are many pigs, this is usually not the case. Lots of native ground covers can sometimes be a drawback, especially if you’re barefoot. It is best to be careful when walking around Nohu (Triblus cistoides). Also known as the puncture vine, its seed pods have large thorns which would be quite painful to walk on. Other common ground covers include ilima (Sida fallax), pa’uohi’iaka (Jaquemontia ovalifolia), and mau’u ‘aki’aki (Fimbristylus cymosa). 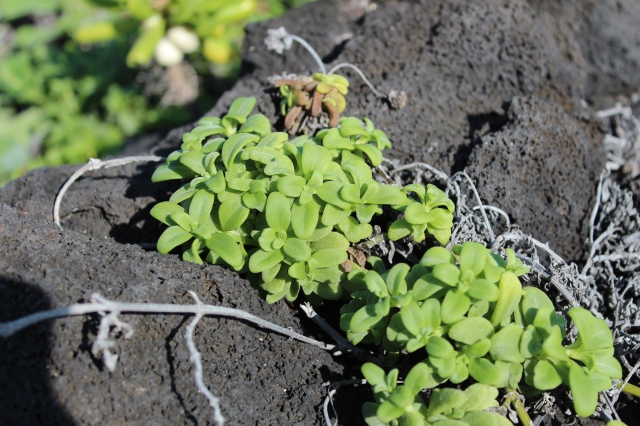 This is nehe (Melanthera integrifolia). It is popular in home landscaping for doing this very thing. Most landscapers have it crawling over lava rocks.

Here’s a plant I’ve never seen in the wild before. This is ohelo kai (Lycium sandwicense). It has large red berries like the native Vaccinum spp. from the mountains, but I didn’t check if it was just as delicious. 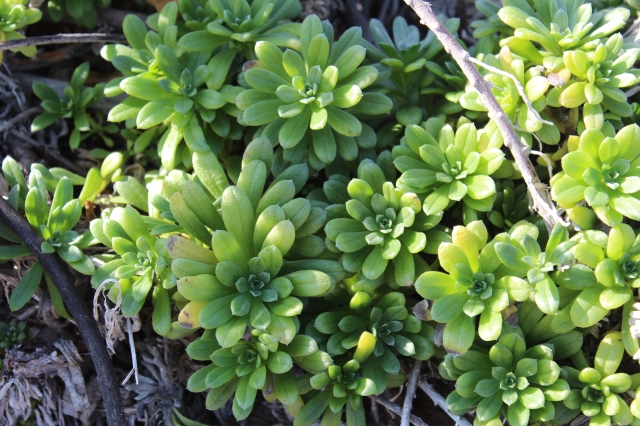 These cute plants are hinahina (Heliotropium anomalum var. argenteum). They are still common in many parts of the islands. Look for the little rosettes typical of the species.

One plant that I did not see much of was this akoko (Euphorbia degeneri). I only saw a few patches. Overall, the plants looked healthy. 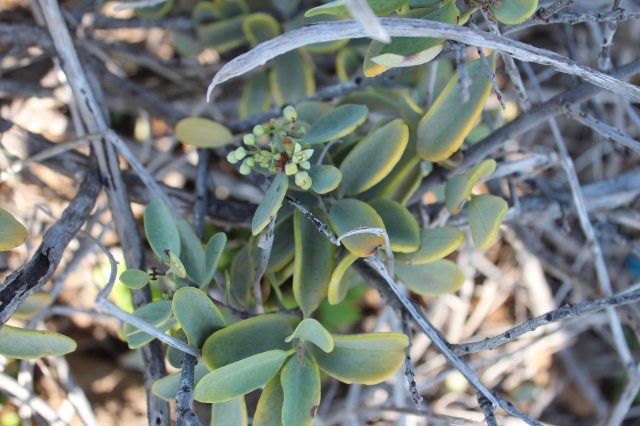 The last plant I wanted to highlight was this coastal sandalwood. Iliahialoe (Santalum ellipticum) is still found in good numbers in and around the Makapu’u area.

I was tempted to keep going up the gulches behind Sea Life Park. But I remembered that I was there for a party, not to hike. It was hard not to get carried away. So the next time your enjoy the Makapu’u beach, take a look around. That healthy looking plants you’d see are probably native.

This entry was posted in Botany and tagged Native Hawaiian Plants, Strand. Bookmark the permalink.