Posted on October 8, 2012 by Sebastian Marquez 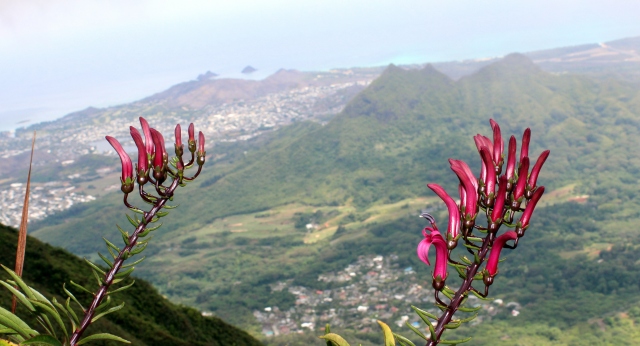 Cold, windswept cloud forests aren’t what one typically first thinks of when associating environments to O’ahu. Overlooked or not, they are critical habitats for many unique plants and animals found only here in Hawai’i. This is many of the native biota’s Masada: a great montane stronghold. The analogy is also appropriate because even here, in the most remotest of habitats, the natives are under siege by invaders. Will the defenses hold?

What better area to check on this habitat than Konahuanui; at 3150 ft, it is the highest point in the Ko’olaus. It is such a familiar sight to urban O’ahu and yet still foreign. The summit is a few hours hike one-way from Honolulu. Unfortunately, this difficulty in access wasn’t much of a barrier for invasives. Palm grass (Setaria palmifolia) was everywhere! And, we also came across an invader of the more motile kind.

But all hope is not lost for many native species are still there.

Some of the native flora that is still common up on the summit are the native mints (Phyllostegia spp). This species (P. lantanoides) has much more rugose leaves than the other native mint in the area (P. grandiflora). It makes this species look more like the non-native lantana, hence the name. For those interested in scientific nomenclature, the suffix “oides” is Greek for “resembling”. So if we gave Coors Light a scientific name it would be something like Pseudocerveza hydatoides… That’s right… I went there!

Aside from corny science jokes, I also like Hawaiian lobeliads. And Konahuanui is nice because there are representatives from several different branches of the endemic lobeliad radiation. One clade includes the multi-branched shrubs and trees: the Clermontia spp. On Konahuanui one can find the species pictured above, Clermontia oblongifolia. 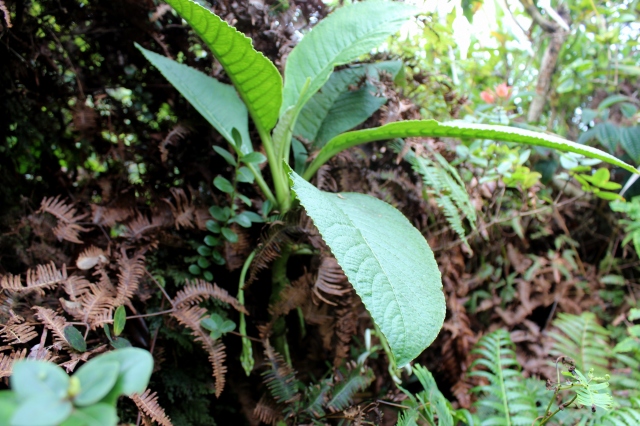 Another part of the family found on the summit are the Haha (Cyanea spp). These have been hit hard by all the upheaval in the past few hundred years and are now quite rare.  This specimen on the summit is Cyanea humboldtiana. 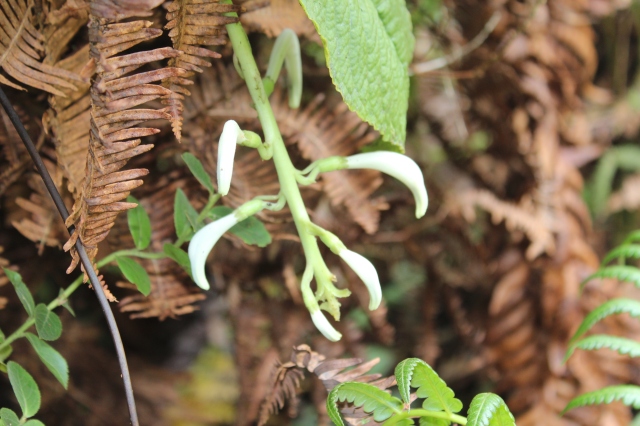 It may look different from the other C. humboldtiana I’ve seen further east, but luckily we caught it with new inflorescences. It had the long, glabrous peduncle and showy white flowers typical of the species. 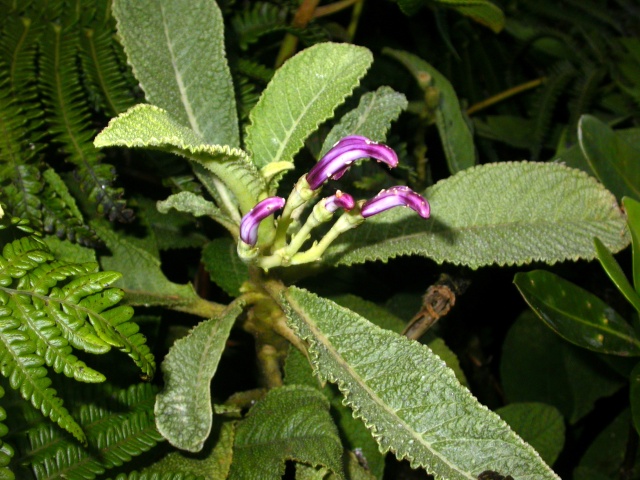 What’s neat is that there is another species of Haha found on Konahuanui. This purple flowered type is some sort of Cyanea calycina. Aside from the different flower color, notice how much shorter the entire inflorescence is. It is quite amazing to me to see all the variations within the genus. Or at least attempt to. With roughly 76 different species, many of which are highly endangered, it might not be possible. Regardless, seeing any Cyanea along the trails is always a special treat.

Another large radiation within Hawaiian lobeliads are the plants with terminal inflorescences. That is, flowers growing from the tips of the shoot. This morphological segregation seems to hold up phylogenetically, research shows that these plants form a sub-clade within the Hawaiian lobeliads. And, again, Konahuanui still holds a nice diversity of these plants. 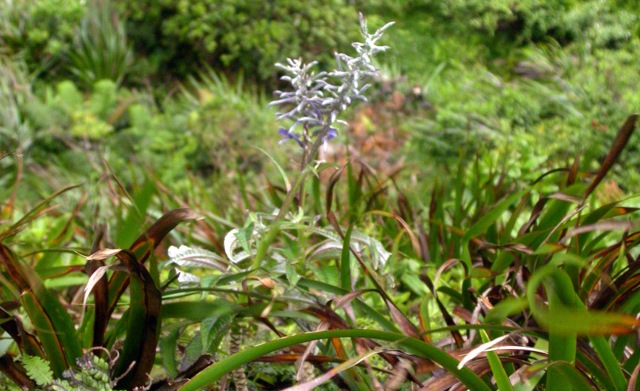 One species is part of Lobelia sect. Revolutella. Many species in this part of the family can be found in dry environments. This species, Lobelia oahuensis, is one that resides in wet forests. If you do catch it in flower, be sure to take a lot of pictures! It throws out a bunch of dainty blue flowers which are awfully pretty. 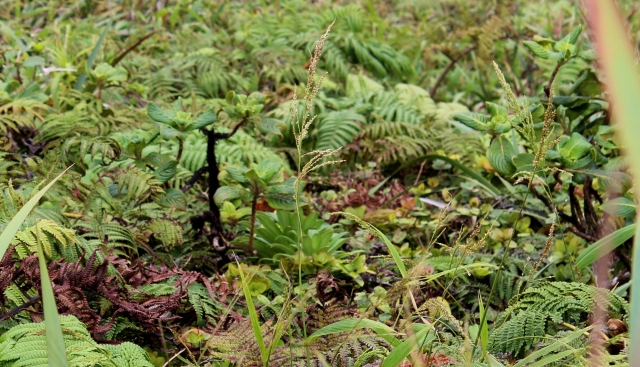 A different branch of the family found on the summit is Lobelia sect. Galeatella. These are the giant bog type lobeliads that, unlike sect. Revolutella, are only found on wet summits. Pictures above is one of the species. Beneath the Broussasia arguta are a couple of the rare Lobelia gaudichaudii. When not in flower these plants can be pretty inconspicuous. This species does start flowering in the wintertime, so keep an eye out for them. The inflorescence, in my opinion, is even more impressive than sect. Revolutella. It has the same terminal flowers, but they are much larger. And L. gaudichaudii flowers are a nice showy red.

The final branch of the family found on Konahuanui are the Trematolobelia spp. One main difference with these are their method of seed disperal. Whereas both endemic sections of Lobelia have their dry capsules split open, Trematolobelia capsules develop many holes where the seeds are then dispersed by the wind. This large, strapping guy found right on the trail is Trematolobelia macrostacys.

But the piece de resistance to this post is the other species found on Konahuanui, Trematolobelia singularis. They also start flowering in the winter and we were lucky to catch one of the early birds. I’m sure you’ve had enough of me talking, here are more pictures of this mighty fine plant: 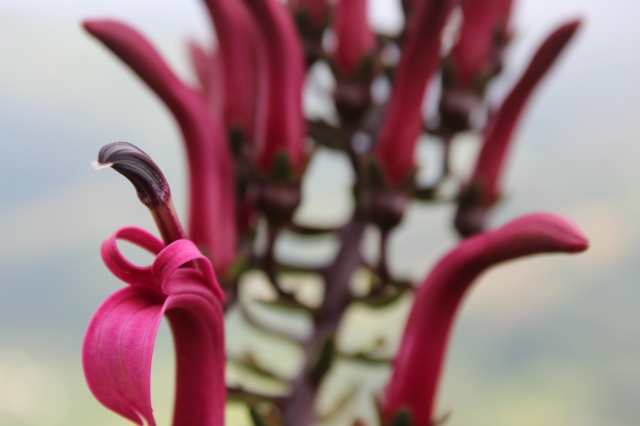 Now the probably apocryphal story of Masada is that the Romans laid siege for months only to find upon entering that the inhabitants had committed mass suicide. Unfortunately, in many montane strongholds here in Hawaii, we’ve played the part of the Romans to a T. Let us do what we can to make sure that in this instance, in this version, we craft a happier ending for the native inhabitants of our precious cloud forests.

7 Responses to Lobeliads of Konahuanui