Intro to the plants of Thurston Lava Tube 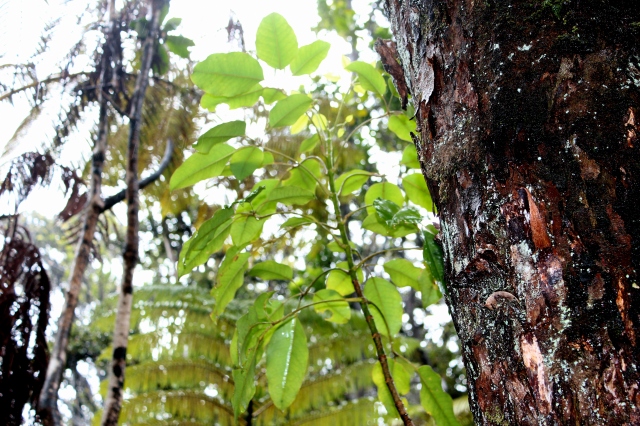 If you’re brand new to the Native Hawaiian plant scene and happen to be on the Big Island, please check out the Thurston Lava Tube. It is an easy way for someone to get an idea of what native forests are like. That idea is absolute wonderment by the way…

I mentioned way back in the very first post on this blog that on Oahu, if you want to see native denizens of the mountain forest, you usually have to hike for a while to see them. Many of the trails on Oahu start in huge tracts of invasive species. It boggles the mind at the amount of upheaval that happen to the Hawaiian forests.

Which is why I cannot repeat enough how awesome Thurston Lava Tube is. You park your car in the parking lot, walk a couple feet in and the riches of the forest lay before you. Let’s take a look at some of those riches. 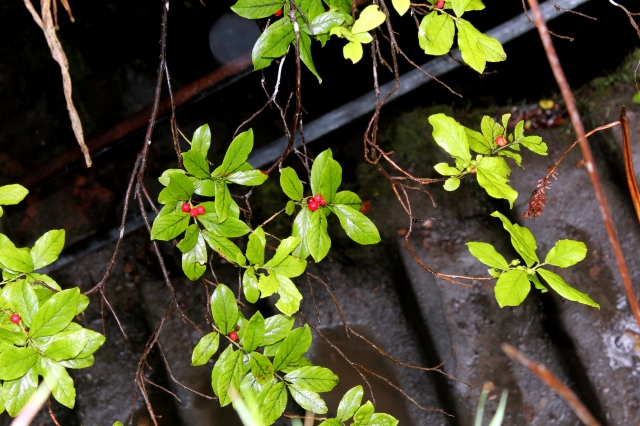 At the far entrance to the lava tube, one shrubby ohelo (Vaccinium calycinum) hung over the stairs. The juicy berries were quite tempting. I can’t really say they were the tastiest fruit on the planet. Considering there aren’t very many delicious native fruit to begin with, I’ll take “kinda yummy”

The forest canopy in this part of the Big Island is almost pure Ohia (Metrosideros spp.) What seems to be codominant in this type of forest, although not necessarily a canopy species, is hapu’u (Cibotium ssp.) 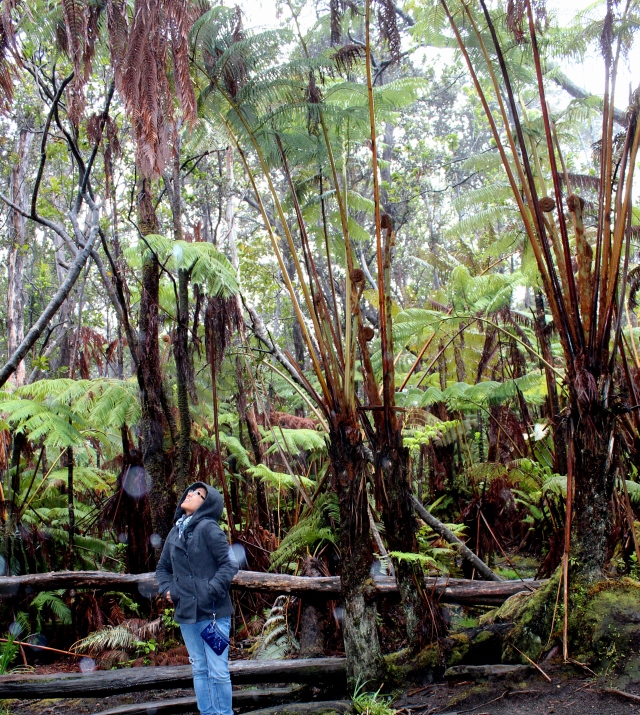 As you can see, the hapu’u around the lava tube were still quite tall, at least 15-20 ft. With all the hapu’u, there was lots of decaying hapu’u trunks around. The ground itself was full of mosses and other bryophytes growing on all the decaying matter. 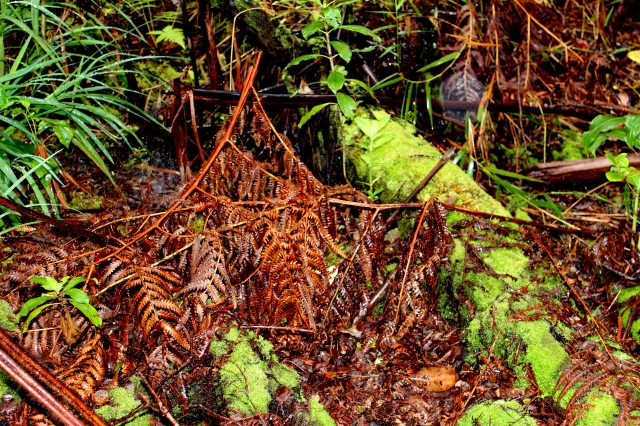 On one hand it’s ironic: to see a healthy living forest, you need to see a healthy dead forest. But on the other hand it makes sense. Before humans arrive, there were no native earthworms. Without them eating all the decaying matter, the forest floor probably wasn’t visible. It would have been covered in layers of rotting plant matter in various stages of decomposition. The reforestation areas that I work in all seem to share the same opposite trait: a vigorously growing canopy, but bare soil everywhere without very many ground cover species. Now I might be weird (probably), but seeing the forest floor and not seeing much dirt was awesome. 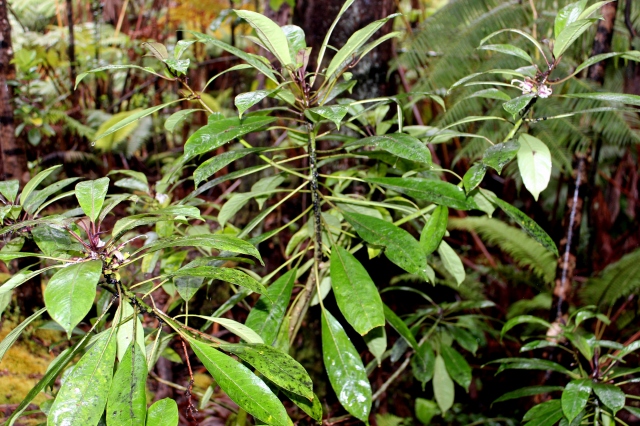 Of course, nothing is as awesome as native lobeliads. Growing out of this rich, detritus-filled floor were many understory species and seedlings of canopy species. This Clermontia parviflora was one of them. 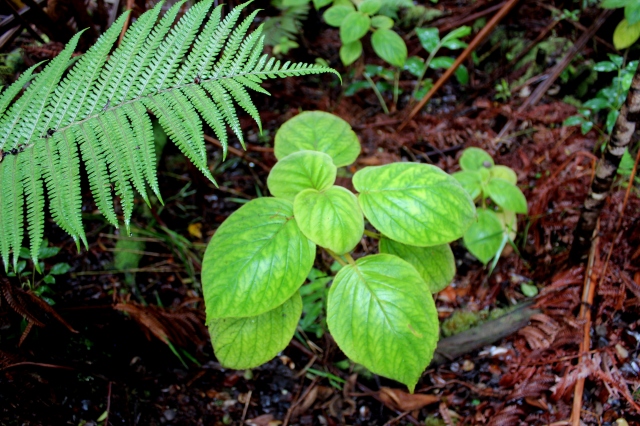 Another species was this Ilihia (Cyrtandra platyphylla). This particular species is only found on the Big Island and Maui. Again, notice all the dead hapu’u fronds on the ground. 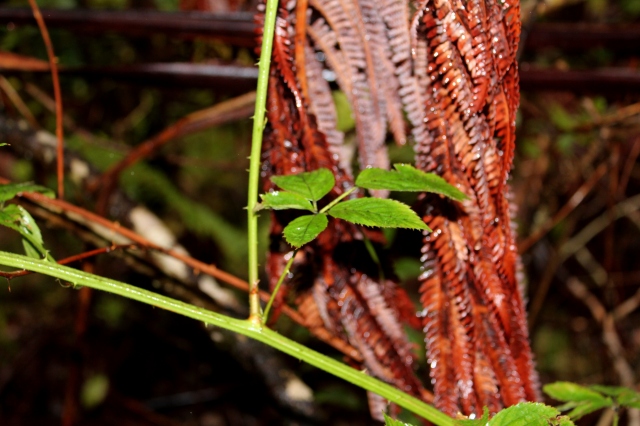 An interesting sight for me was this . It might not be as densely armed as other members of its genus, but it has retained some thorns. (Probably not Akala) 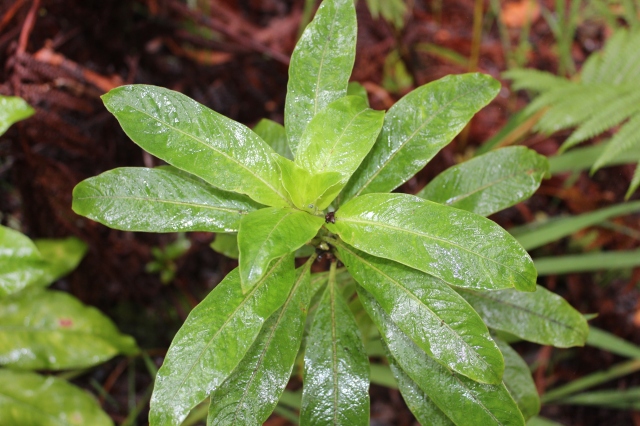 Another common understory plant was this pilo (Coprosma ochracea). These were all around the lava tube. 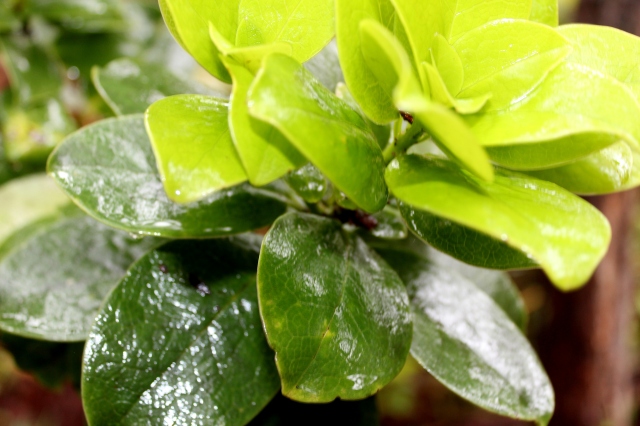 Aside from Ohia, some other trees in the forest include this kawa’u (Ilex anomala). Kawa’u leaves typically have this reticulated venation. 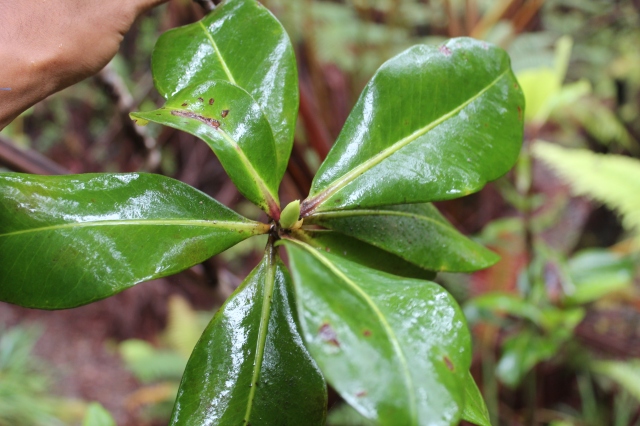 Another tree around Thurston was this Kolea (Myrsine lessertiana). Many different Myrsine species have this sort of reddish petiole.

There was much more to see in the area, but I didn’t have as much time to explore as I wanted so I’ll end it here. I would like to leave you with these parting thoughts though: The beauty of all this is the accessibility. If you follow my posts regularly, many involve strenuous hikes up some friable ridgeline, or bushwacking though tangled undergrowth. But in this instance, just about anyone can join in experiencing the awesomeness that is a native Hawaiian forest. It’s not often I get to say that, so if you’re ever on the Big Island take a detour toward the  Thurston Lava Tube. Your inner naturalist will be ecstatic… and well rested.