The Wonders of Rediscovery

Posted on December 27, 2011 by Sebastian Marquez

I thought Christmas was over. I had just finished a post about the wonderful gift of being able to see rare Achatinella snails in the Ko’olaus. I’ll have to happily revise my Christmas gift. On a whim, Mashuri and I did a Christmas Eve hike into the back of Palolo Valley. We didn’t realize we would end up coming across a plant that had not been seen on the Ko’olau Volcano in over 20 years…

We hiked a couple ridgelines in and around Ka’au crater in the back of Palolo Valley. Now, the trail up to Ka’au is famous amongst the local hiking community for the waterfalls. But what really surprised me was the awesome diversity of the flora of the understory. In so many areas the canopy can still be native while the understory, more easily accessible to non-scansorial vectors of change (i.e. pigs and people), is completely dominanted by oppurtunistic weeds. Instead of nasty invasives though, we were coming across a number of native understory species.

One of them is this endemic moss (Pyrrhobryum pungens). There is an indigenous species in this genus (P. spiniforme), but one quick way to tell the difference is P. pungens has much longer leaves. The gentleman I was hiking with is a moss expert and he needs to get the word out there on how awesome the bryophyte component of Hawaii’s flora is! Hint, hint. In all seriousness, bryophytes are a big part of a healthy native forest which get overlooked far too often. 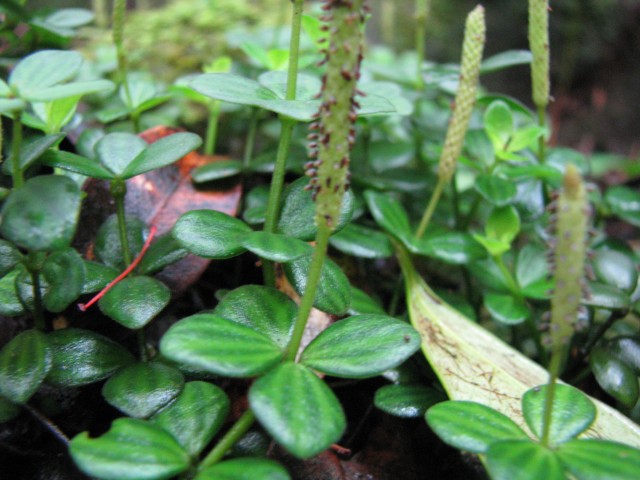 Another native understory plant we came across was this Ala ala wai nui (Peperomia tetraphylla). These were particularly cute; whole colonies were growing epipetrically in several places.

We can’t talked understory and not mention ferns, and Palolo Valley has plenty of native ones.

Another species of fern we came across was this Ctenitis latifrons. One cool trait of this fern is all the hair like scales on the underside:

Something that I haven’t seen much on hikes is Kamanamana (Adenostemma viscosum). In the back of Palolo, it was quite abundant. There were lots of seedlings in certain areas which was really nice to see. 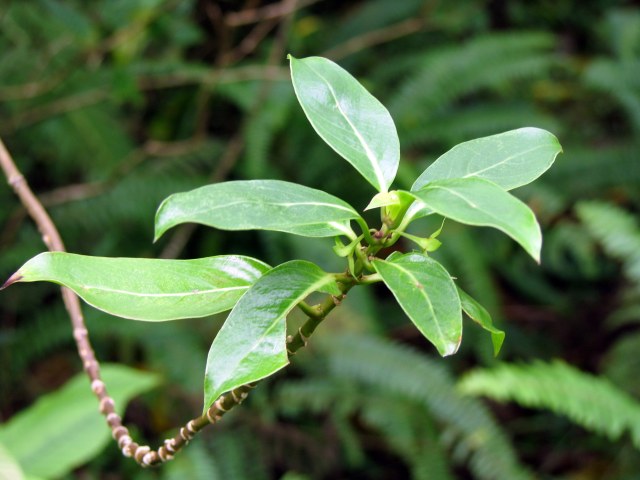 Here, we came across this Au or Pilo (Kadua acuminata). The native Kadua species are quite morphologically variable. Many people are familiar with the Manono tree, but this species grows more vine-like.

Speaking of vines, I’ve drawn it out long enough. What exactly was this rediscovered plant? It was all my hiking partner; I was too busy trying not to step on the Kamanamana. On one of the hillsides, Mashuri spotted a vine-y legume.

Now, that got us to thinking of the possibility. Still, a lot non-native vines have this tri-foliate look. On top of the fact that the species we were thinking of hadn’t been seen in the Ko’olaus since the 80’s. But then he spotted the infloresence which erased all doubt:

So it’s not exactly like rediscovering Lobelia monostachya or Cyrtandra gracilis or Cyanea mannii; species that were thought to be wholly extinct for decades.  But it’s still neat. And luckily it’s all relative; for me this was discovery. Because, let’s face it, every hiker that’s had even the slightest interest in native biota has dreamed about being that guy. The guy or gal that hiked into some inaccessible place and found something important. And it actually happened, on some level. It was a great, great feeling, upon recognizing the flowers, to know that that day became a little more special than usual.

Here are some more pictures of this wonderful surprise:

Ahhh, such a marvelous thing. So thanks again, Ko’olau Volcano, for the great Christmas gift! What a great and completely satisfying way to end the year. Let’s see what next year holds in store…

This entry was posted in Botany and tagged Hiking, Native Hawaiian Plants, Strongylodon. Bookmark the permalink.

4 Responses to The Wonders of Rediscovery