The treasures of Hidden Valley

Posted on April 3, 2011 by Sebastian Marquez

looking at the unsuspecting world below...

I went with the O’ahu Plant Extinction Prevention folks to help with 2 very endangered plants found on the windward side of the island: Schidea kaalae and Cyanea truncata. We hiked up a ridgeline to Makaua Gulch, or also known colloquially as “Hidden Valley”.

At first glance, Makaua Gulch seems like the perfect lost world: It’s on an isolated hill away from the main Ko’olau range. The gulch itself is a hanging valley separated from the main valley floor by a rock wall hundreds of feet high. It should be a place worthy of Arthur Conan Doyle but unfortunately the gulch is pretty degraded because of the presence of feral ungulates. Pigs and goats have destroyed many parts of the forest, and fast growing invasive plants have taken over.

Like a harbinger of things to come, we encounter the northernmost known population of another Schidea, Schidea globosa. Ma’oli’oli is more commonly found on the very southeast of O’ahu. While it can be found in strand vegetation, this individual is growing way up on a steep hillside. 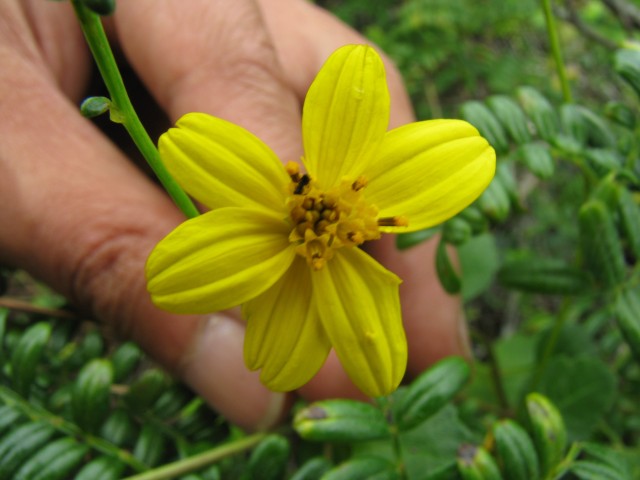 Another plant we saw was this Ko’oko’olau. Bidens populifolia has a fairly restricted range on the windward side, but it is abundant on the ridge up to the gulch. 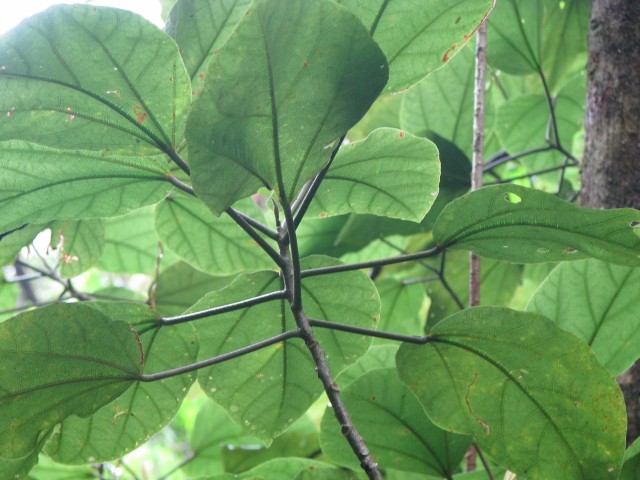 After a long, arduous climb (no hostile tribes or flying pterosaurs, Doyle fans!) we arrived at Makaua Gulch. Here, there is still a healthy population of white hibiscus (Hibiscus arnottianus). The subspecies here, punaluuensis, has extremely large leaves.

In the gulch there is a large exclosure that has outplantings of the 2 plants that the Plant Extinction group is working with in the area. The group works with plants that are in danger of imminent extinction; species with less than 50 individuals in the wild. The plant above is one of them, Schidea kaalae. S. kaalae has a disjointed population in the northern Wai’anaes and also here on the windward side.

Cyanea truncata is the other plant P.E.P. is working with. Makaua Gulch was known for them, but the last wild plants were killed by pigs in the late 80’s. For a while, the plant was thought to be extinct, until the species was rediscovered in 1998 and again in 2004. 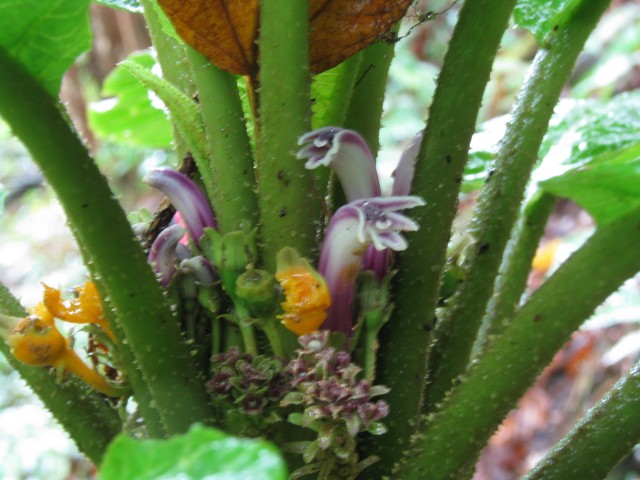 The infloresence for C. truncata is pretty distinctive with tight, upright flowers. As you can see here, the fruit are being eaten by something. Hopefully, whatever it is will be spreading viable seeds around.

When we were finished with the 2 species in the exclosure, we went to check out some more treasures of Hidden Valley. The wild specimens of C. truncata might be long gone, but another Cyanea, C. crispa, still has wild populations in the gulch. I’ve posted about seeing C. crispa in the southern Ko’olaus, but not in these numbers. Indeed, Makaua Gulch might be the last stronghold for crispa.

The population of Cyanea crispa that we saw are all growing on the bank of the intermittent stream. One easy way to tell the difference between C. truncata and C. crispa is by looking at the stem…

… it is quite fleshy on C. crispa. Most Hawaiian Lobeliads (C. truncata included) have woody stems. 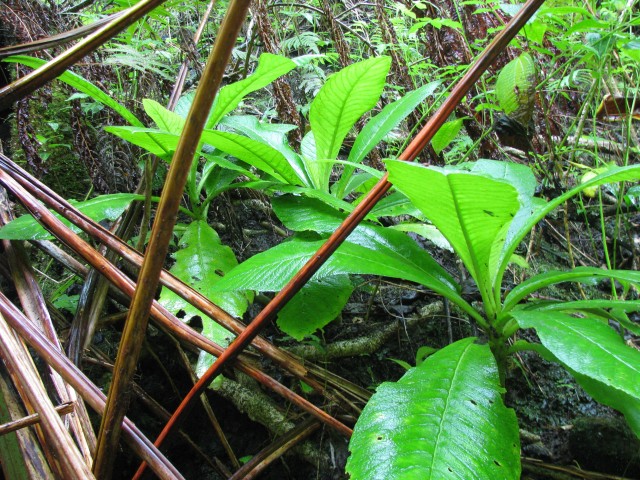 Here are some more Cyanea crispa. In just the little gully we were in, there are about 6 plants. There are more crispa further up the gulch. Unfortunately, in the current depauperate world of Cyaneas, 6 plants in one spot is a lot.

Another neat plant in the area was ‘Ala’ala wai nui. This species (Peperomia oahuensis) is known for not only being epiphytic but also for having 1 leaf per node. Many of the different Peperomia species I’ve seen grow on rocks. P. oahuensis is seen mostly growing on Hibiscus. 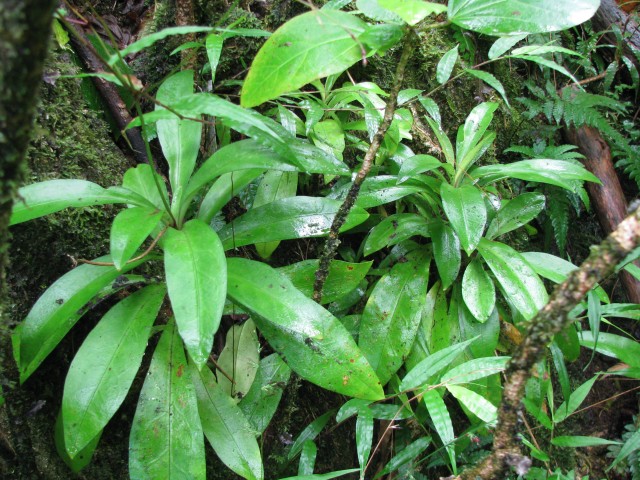 The last thing we checked out was a fenced area for a wild Schidea kaalae that was discovered. Luckily, the pigs missed this one plant. If I was a melodramatic guy, I would write epic poetry of the last of the Schidea. Watching as its brethren fall to alien invaders one by one. “Waiting,” as John Clynn said, “among the dead for death to come.” Until, at the last moment when all hope is lost, it is saved by metal-wielding hominids. Epic-uber-epic. Well that’s if I was a melodramatic guy. I’ll leave the story-telling to Arthur Conan Doyle. Me, I’ll stick to the blogging.

2 Responses to The treasures of Hidden Valley