Remnant of the Past or Vision of the Future?

Posted on January 30, 2011 by Sebastian Marquez 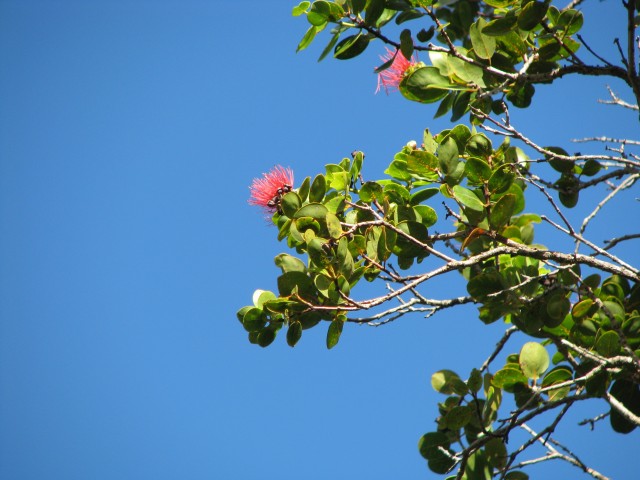 A majority of these botany hikes I go on have been with Joel and Kenji. It has been a real privilege because they are both walking encyclopedias of the biota here in Hawai’i. So much of what I have learned is because of these guys. This past weekend we went to check out an interesting patch of Ohia forest in the hills behind Pupukea.

We started on the Kaunala Trail by the Boy Scout camping area. While it has been heavily invaded by alien species, there are quite a number of native plants on the trail. Some of which are not easily seen elsewhere on O’ahu.

Hala pepe (Pleomele halapepe) here in the northern Ko’olaus tend to grow bigger leaves than the specimens in the south. I was also happy to see that there were many individuals. We must have seen over a dozen that day. 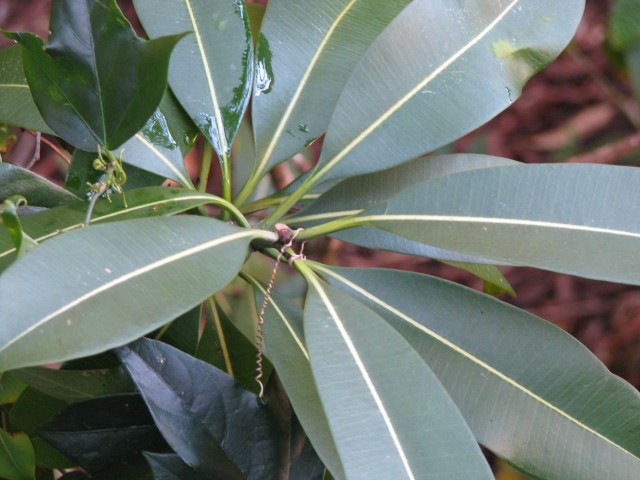 This was a first for me. The Kaunala trail is known for its easy to see Holei (Ochrosia compta). Holei is in the same family (Apocynaceae) as the more common Maile (Alyxia oliviformis) and Hao (Rauvolfia sandwicensis). Indeed, without the fruit or flowers, Holei looks quite similar to Hao. The leaves for Holei are typically thicker and a much darker green that Hao leaves. A better diagnostic is that the petioles on Holei are smooth; they lack the extra claw-like growths found at the base of the petioles of Hao leaves.

Another thing that the Kaunala trail is known for is the grove of Sandalwood or Iliahi trees (Santalum freycinetianum). These large trees escaped the intense logging back in the 1800’s during the height of the sandalwood trade.

We also came across this sedge (Gahnia aspera). Aside from being found in drier habitats, this species differs from the more common Gahnia beecheyi by the strange club-like infloresence.

Eventually we left the trail and veered down toward the patch of Ohia. It was in an area that was crisscrossed by many dirt bike trails.

I thought this forest was really weird. For one, it is really low down on the hillside, way below where I would expect to see native forest. Another strange thing is that it is dominated by only 2 native plants: Ohia (Metrosideros polymorpha) trees and pala’a (Sphenomeris chinensis) ferns. This made it a bit surreal for me. Not to mention all the dirt bikers we had to dodge.

There are all sorts of different Ohia varieties. Mostly var. glabberima and imbricata. I did see one that might have come from tremuloides stock. 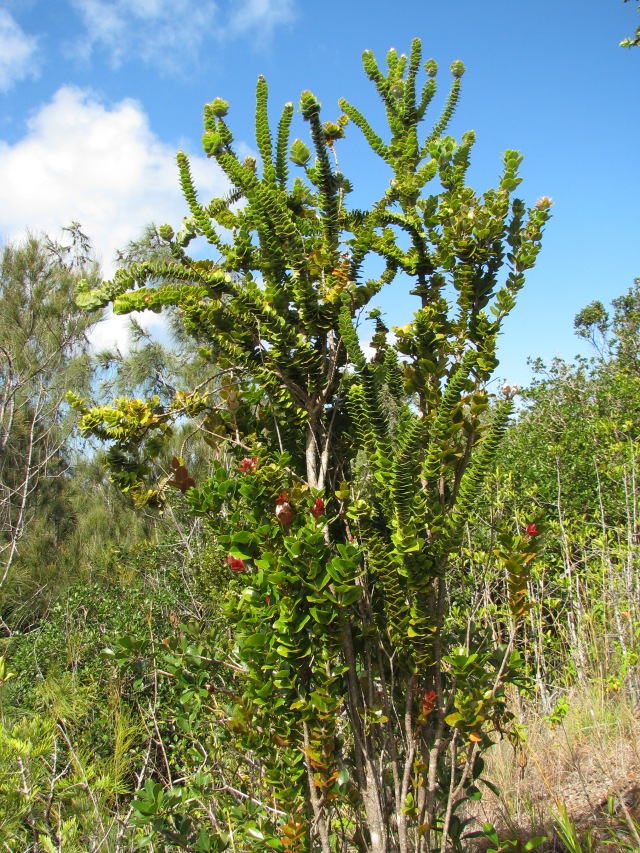 It’s pretty cool to see just how variable Ohia trees can be. Aside from all these different types there are few other native plants in this patch of forest.

Strange as it may seem, that is pretty much it for native plants. It isn’t very diverse. And because it is so low, the entire patch is surrounded by invasive species, mostly ironwood and strawberry guava. The patch itself is being invaded by Ardisia elliptica but for the most part it is healthy. There are so many Ohia seedlings coming up, and many of varying sizes and ages. It looks like the patch is easily replenishing itself.

I couldn’t wrap my mind around what’s going on: A healthy low elevation patch of Ohia forest with an understory of native pala’a and tons Ohia seedlings. In the middle of a non-native hillside. At the end of the day, I couldn’t tell how it happened. Was it a remnant patch that was saved from logging and grazing? Was it former pasture land that for some reason reverted back to a native forest while the rest of the area didn’t? I’m still quite the neophyte so I think my conjecture might tilt too far toward rampant speculation, but seeing all those baby Ohia was definitely a marvelous thing.

This entry was posted in Botany and tagged Hiking, Metrosideros polymorpha. Bookmark the permalink.

4 Responses to Remnant of the Past or Vision of the Future?