Posted on January 21, 2011 by Sebastian Marquez

Hawaiian nettles are another strange product of that engine known as island evolution. Nettles (Urtica spp.) are well known around the world for their stinging hairs which are a major deterrent for herbivores (or the random off-trail hiker). I’m glad I never encountered the Common Nettle (Urtica dioica) while playing outdoors in Chicago. Stinging hairs aren’t necessarily basal to the family, but anytime traits are secondarily lost, it always gets my attention. Always. Nettle-less nettles… I want to know more!

I’ve come across Mamaki in many places, though never in large numbers. It is common at our Manoa restoration site, but that is more for anthropogenic reasons than anything else at this point. We have, however, seen a lot of natural regeneration of Pipturus after we’ve cleared an area of invasives. Mamaki is useful for our restoration efforts because the partial shade it provides helps us establish some of the more sensitive native plants while simultaneously suppressing fast-growing weeds. 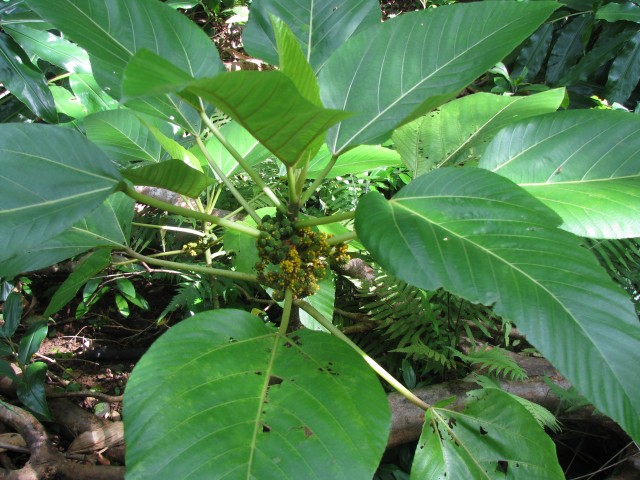 Olona is cool because it was one of the few endemic Hawaiian plants that was cultivated extensively in old Hawai’i. It was used because the fibers produced by its laticifers are some of the strongest in the plant kingdom. While we do happily have many young Olona coming up, the site does have old specimens from before the project started in 2005.

Finally, I did want to make special mention of Akolea. I have come across it in riparian habitats, and Akolea holds its own. In fact, in the Lulumahu stream on the upper slopes of Konahuanui, it really stood out to me because Akolea was one of the few native plants I saw that was a dominant member in its plant community. Maybe not quite to the same extent as Uluhe but still very conspicuous.

So there we are, a group of plants that have lost an amazing defense, one species that is still quite common in the right conditions, and two more that we are working on restoring. Watch out strawberry guava, these nettles are coming back!

This entry was posted in Botany and tagged Urticaceae. Bookmark the permalink.

1 Response to Urticaceae strikes back!